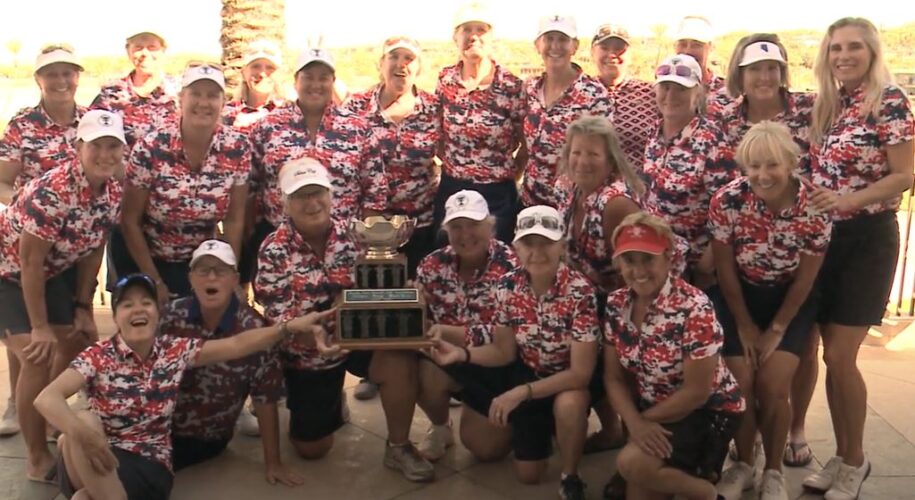 Oct. 6, 2022–The North squad made it two straight Silver Cup titles, rallying from a two-point deficit to post a 20½-17½ victory in the three-day event held Oct. 4-6, 2022, at Reflection Bay Golf Club. The North started the final day trailing the South by two points but an 11½-6½ edge in the singles portion of the tournament sparked them to the win.–By Bill Bowman, www.LasVegasGolfInsider.com

The North now holds a 17-12 lead in the Silver Cup matches. Click here for the 2022 Silver Cup final results.

The first day of the 2022 event, the foursomes matches, saw the South come away with a 5½-4½ point edge.

But it wasn’t easy.

The South team jumped out to a huge lead as they won five of the first six matches. But the North battled back and won three of the final four matches (with the final one being tied) to close to within a point heading into the second day.

Day 2, the four-ball portion of the event, saw the North victorious in four of the first six matches on the scoreboard (to go along with one South win and a tie).

But the South won the final four matches on the scoreboard (not all of the matches finished in order as some were closed out early) and for the second straight day posted a 5½-4½ edge.

That gave the South an 11-9 lead heading into the final day’s singles matches.

The North started the final day quickly putting the first five points on the board–and seven of the first 10–starting their comeback to retaining the Cup.

“The girls did their jobs,” said North co-captain Joanne Bower. “We were behind by two points going into the singles but there was no panic at all. We know it’s hard to win when we come down here and being behind by only two points was a good accomplishment.”

The North team geared up for the final round with a team dinner the night before the finale.

Now with back-to-back wins, the North is eyeing a three-peat.

“There’s only been two times in the history of the Cup that a team has won three in a row,” Bower said. “We want to win the third one in a row next year up North.”

Bower, who co-captained the team with Carol Colwell, said the event accomplished its goal…again.

“We try to make this a fun tournament,” she said. “Sure, both teams want to win but this event started out so the North and South could make friendships and it’s done that…and more.”

South co-captain Christine Soscia said the first two days were nice but not being able to close the deal will motivate the team for next year.

“Our players will learn from this,” Soscia said. “In the end we made new friends and we have nine rookies who are so excited to come back next year.”

Soscia said the early hole made it tough for the South to make a comeback in the singles.

“Our first group out held steady for the longest time,” she said. “But they just ran out of holes. The one thing we can say is our team played great…the North just played a little better.”

Soscia said she and co-captain Regina Quintero wouldn’t change a thing when it comes to the lineups they used.

“Everyone we put out there played well and that’s all you can ask,” she said. “Sometimes you just get a little luckier bounce here or there.”

She concluded the team will look at the event as a very positive experience.

“We had nine rookies and they are already looking forward to next year,” Soscia said. “In the end everyone made new friends. Everyone got along so well and the camaraderie between both teams was amazing.”