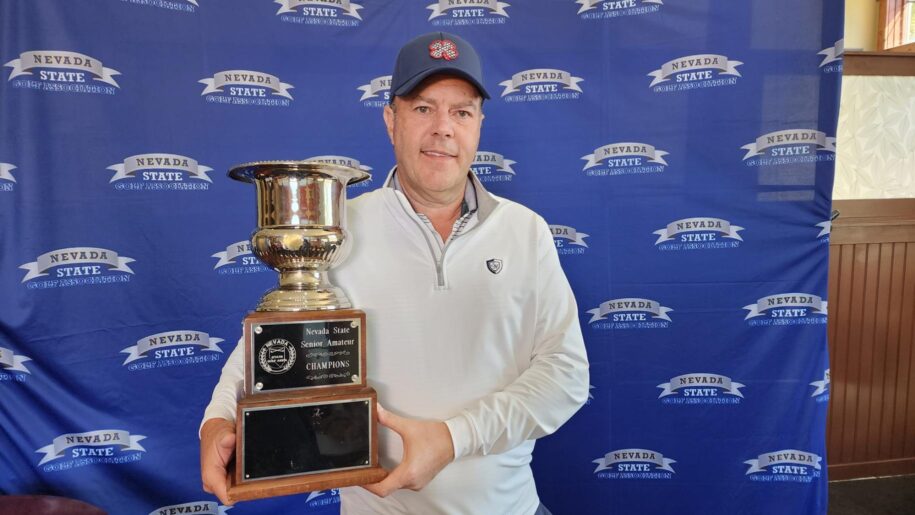 Roberts, a Southern Highlands member, led wire to wire with rounds of 70-70-72–212 to edge Red Rock Country Club member James Corey by a single shot. Corey made things interesting when he fired a 30 on the outward nine during the final round, but Roberts withstood the battle.

Roberts chipped in for birdie on the tough par 4, 9th hole, but Corey immediately answered with a very long birdie putt of his own.

“My goal going into the final round was to shoot one or two under the front, and I did, but James Corey shot 30,” said Roberts, a 3-time State Senior champion and former SNGA Senior Player of the Year. “So I only had a two shot lead going to the back nine and it was a dog fight coming down the stretch, but I hung on.

“James was hitting it great and making pretty much every putt. The turning point was on number nine. I was one under and James was five under (for the day) coming into that hole and he hit it on the back of the green. He had about a 50-foot putt down the hill with a lot of turn and grain, and it would be a difficult two putt. I missed the green by a foot, pin high, but had my worst lie of the tournament. It was buried in the rough and I had to play like a trick shot to get the club on the ball. I ended up holing the chip shot for birdie. I thought I would probably have a four shot lead going to the back nine because I thought James would probably three putt, but he ended up making birdie on top of me to shoot 30. Those were two of the best shots I think I’ve seen in a long time when it mattered.” 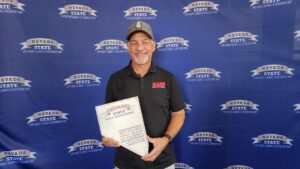 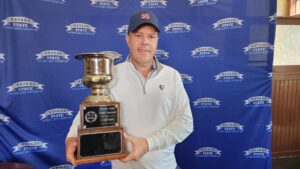 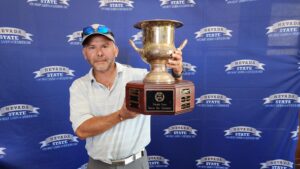 In the senior net, Tovar, who plays out of Eagle Valley Golf Club, hit his irons very well during the final round to earn the win over Richard Clark from Wolf Run Golf Club. Tovar now has a handful of victories, each coming at Dayton Valley.

“All three of my victories with the Northern Nevada Golf Association have been out here and it’s kind of odd because I’m not a big fan of the course, but I’m a fan of it now,” Tovar said. “I kind of pieced together rounds that just kept me in it for the first two days, but today I was striking the ball really well. Today was a moving day. I did what I had to do. Luckily for me, I came out with the victory.”

Duncan is a member of Dayton Valley and used his course knowledge to his advantage to hold off former state champion Gary Carpendale from Southern Nevada. It was a first for Duncan in winning a state title.

“I’ve had some success in Northern Nevada, but never the state,” Duncan said. “It feels pretty rewarding and very nice, and I’ve got a lot of nice friends to celebrate with. I started off the final round nicely, getting it under par early, unlike the other days when I finished strong.  I had good swing thoughts and played well for three days.”

Duncan knew he was in for a fight with Carpendale but kept calm when Carpendale made a push.

“I lost the lead during the final round for a few holes to Gary because he got it to 11 under, but he ran into a little bit of wind problems,” Duncan said.

In the Silver net, Erwin, from Genoa Lakes Golf Club, defeated Richard Flores by five shots and owed an assist to his family.

“I really don’t play a lot of these and I actually wasn’t even going to play this one, but then my brother-in-law shot me a text and said, ‘Hey, I’m playing. Why don’t you come along and play?'” Erwin said. “And now it feels great. Especially yesterday, I was able for the first time ever to shoot under par, so that was really good today. I was able to hold it together and that was nice.”