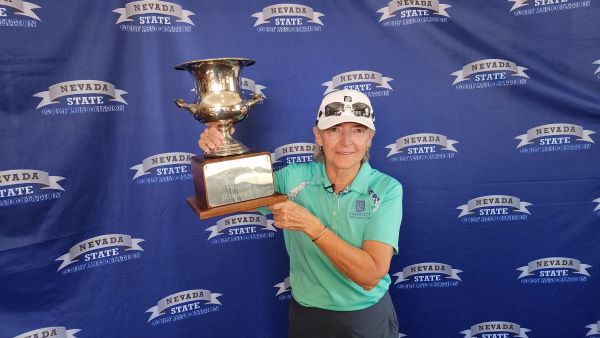 Ruth Maxwell started the round with a birdie and closed it out with nine straight pars in cruising to a four-shot victory.

It was her second straight state championship and third overall.

“I started out strong with a birdie and that’s always a great way to get the round going,” Maxwell said.

A double bogey on the ninth hole left her tied with Christy Atencio heading to the back nine but nine straight pars were good enough for the win.

“I told myself I just had to play solid on the back,” she said. “I was just trying to hit fairways and greens.”

Mission accomplished as she hit all nine greens.

“I had a lot of birdie chances but it was just one of those days where the putts weren’t dropping. They were just sliding by.”

She has played in three state senior events and won all three.

Katy Rosane posted a net eagle and three net birdies over her final four holes to post a one-shot victory in the Net Division.

“This was very unexpected,” she said. “I hadn’t been playing well and was just trying to do the best I can and finish strong.”

She said it was easier said then done.

“I had some disastrous holes,” she said. “But when I finally got a par on the last par-3 (the 16th where she wound up with a net eagle) it really got me going. I just said to myself to get it over the water and then I had two good putts and thought, yes, I’m back in the game.”

She said her playing partners’ attitude really helped her round.

“I had some really good people I was playing with,” she said. “It was a great group. We don’t take it too seriously and just kept it fun. If you get an 8, that’s OK…we just go on to the next hole.”