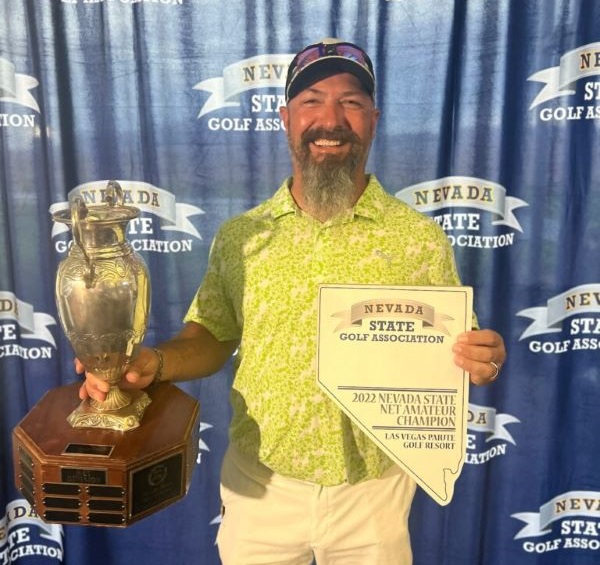 Jacob Haas jumped out to a quick lead in the championship match of 2022 Nevada State Net Amateur Championship and went on to beat Scott Flanigan 2-and-1 for the title. The tournament, which was a three-day event, was held Aug. 10-12, 2022, at the Las Vegas Paiute Golf Resort’s Snow Mountain Course.--By Bill Bowman, www.LasVegasGolfInsider.com

“It was a tough match, all of them were,” Haas said. “The key was I just kept grinding.”

Haas, business manager for an electricians union in Reno, won three of the first six holes to go 3-up in the match but couldn’t shake the pesky Flanigan who won the next two holes to be one-down.

Haas bounced back to win two of the next three holes to go back to a 3-up lead.

But Flanigan wouldn’t go away. After the two halved the 14th hole, Flanigan won back-to-back holes (15 and 16) to get it back to one-down.

Haas then closed it out on the 17th hole with a birdie.

“I really loved the 17th hole,” he said. “I drove the ball well and had a chance to get to the green in two. It was nice to have a birdie. That is definitely one of my favorite holes.”

Haas got into the title match with a win over Jason Buckholz in a match that went 21 holes.

He said his driver was on and off in the finale.

Haas was runnerup in this event in 2021 when it was held at Genoa Lakes up north.

Now he will have the chance to defend the title in 2023.

“I’ll definitely see if I can do it again next year,” he said.

He added the victory topped off a solid week in Las Vegas.

“This was definitely a great way to spend a few days in Vegas,” he said.