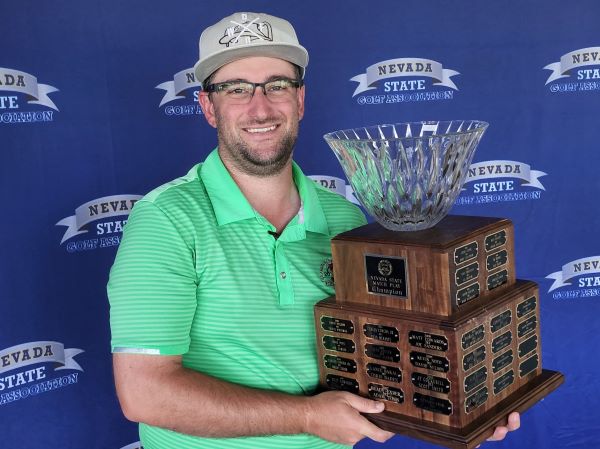 Goldstein, who works as a cello instructor in Las Vegas, came into the event as the No. 2 seed while Hawk was the No. 4 seed. Hawk is a Foothill High product and a Utah Valley golf commit.

Both players represent the SNGA and each had first-round byes in the tournament. Each of them won Round of 32 and Round of 16 matches on Monday followed by winning quarterfinal and semifinal victories on Tuesday setting up the 36-hole finale on Wednesday.

“It was just an awesome fight,” Goldstein said. “Andrew is a great player and just never gave up. It was a great match. Both of us played very good golf.”

In the end, out of 34 holes played in the title match, only 11 of the holes were halved. Goldstein won 13 holes while Hawk won 10 holes.

The match was all-square heading into the afternoon 18 holes but Goldstein won four of the first five holes to take a lead he would not give up.

“Winning those holes was nice,” Goldstein said. “It gave me a little bit of a cushion to work with. I just tried to keep hitting quality golf shots.”

He said that cushion let him take a different approach coming down the stretch.

“That put the pressure on Andrew to try and make birdies and go after it,” Goldstein said. “I kept the small lead that I had and forced his hand as the holes wound down.”

Goldstein added he was excited with his game over the whole tournament.

“I hit the driver really well all week,” he said. “I hit a lot of great iron shots. It was just a very solid week.”

He wasn’t hitting on all cylinders coming into this event.

“I ironed out a few kinks in the swing coming in and they held up nicely all week,” he said. “I was missing the ball a little left and figured it out. I had little pulls and for me that’s a scary miss to have.”

Goldstein said he’s had his eye on this title for awhile.

“This was just a great win,” he said. “I wanted to win this one last year. It’s great to have a strong finish in a match play event as well as a stroke play event.”

Hawk finished runnerup in the state match play for the second straight year as he fell to Hazen Newman in 2021.