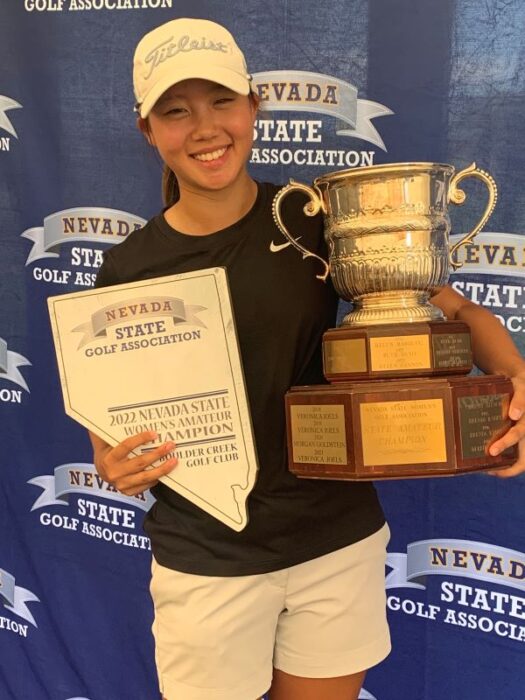 Eunice Han birdied four holes in a five hole stretch early in the final round to win the Championship Division by a stroke.

Han, who will be a freshman at UNLV this fall, earned her first Nevada State Women’s Amateur title. She also won the girls 15-18 division at the Nevada State Junior Amateur earlier this summer. She is a graduate of Mid-Pacific Institute in Hawaii. She is a member of the Southern Nevada Junior Golf Association.

She said she will be heading to UNLV with plenty of confidence.

“I’m playing very well right now,” she said. “But there are some things I can still improve on. I need to get more consistent with my long game and get more tournament experience.”

She said she went into this week’s state tournament with a game plan in hand.

“The first day I just told myself to shoot a good score,” she said. “I went into that day as a placement day and put myself in good position. Today was movement day and I wanted to play well so I moved up and I did that.”

She said the strength of the field also helped her.

“There was some very intense play out there,” she said. “I was very aware there were very good golfers out here but I just told myself to play my game, stay cool and see what happens.”

In the end, she said her thought process was simple.

“I just focused on playing my next shot,” she said. “I tried to stay in the ‘now.’ That was my mindset.”

Saturday was the key day for Quintero as she had three birdies midway through the round to get her off to a solid start as she won her first state title.

Quintero said the win was surprising as she’s is still on the comeback trail.

“It not only feels good to win but it feels good to be back competing,” she said. “I’ve been out of commission for the last six to eight months. Last year at the Silver Cup I couldn’t play. I had rheumatoid arthritis. It got so bad I couldn’t even pick up a pencil. Some days I couldn’t get out of bed.”

Working with her doctors everything is now finally under control.

“We got the medications worked out and I’ve been back playing a couple of times a week for the last two months,” she said.

But she’s still got work to do.

“I’m still not playing my best,” she said. “I’ve lost a lot of strength and about 50 yards off my driver. I’m hitting longer irons into greens and my chipping and putting have saved me when I missed greens.”

She added the course also made a difference.

“I play at Boulder Creek quite a bit,” she said. “I know where to hit it off the tee and I know the greens pretty well. I made a lot of eight-to-ten footers for pars and those were big.”

Karen Bernard had five net birdies over six holes midway through the final round en route to the Silver State-Net crown.

Bernard was four strokes back after the first day before rallying to win her first state title.

To say Bernard was surprised at the win would be an understatement.

“I didn’t think there was a possibility I would win, place or show,” she said with a laugh.

She said her birdie streak also came as a surprise to her.

“Holy cow…it’s probably a good thing I didn’t know that,” she said. “I just tried to do better than I did yesterday. I had two eights yesterday and didn’t have any today so that was great.”

She said she had one thought going through her mind the second day.

“I was just trying to stay on the grass and not get in trouble,” she said. “And I succeeded. My shots went well for the most part. I had a couple of disappointments where the game hurt my feelings but I got over them pretty quickly.”