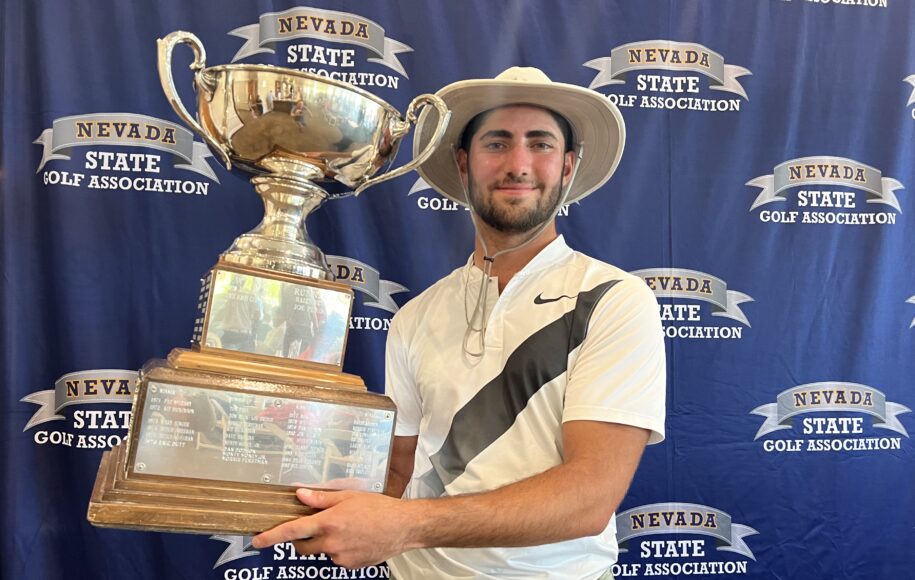 Cameron Barzekoff played his final five holes in three-under-par en route to beating Jackson Parrish and Craig Erickson by four strokes to win the 2022 Nevada State Amateur. A field of 91 golfers teed it up at the historic Las Vegas Golf Club for the prestigious tournament held July 7-9, 2022.–By Bill Bowman, www.LasVegasGolfInsider.com

Barzekoff was the first to admit the victory was much closer than the final scores indicated.

“It was a battle and a lot more stressful than I would have liked,” he said. “Through nine holes I think I was one shot ahead. We were just battling it out. I even went one-down with five to go.”

He stayed cool, calm and collected.

“I just told myself there were still birdies out there,” he said. “I knew it wasn’t over. I managed to play the last five holes three-under and got the job done. I’m really proud of the way I hung in there.”

Barzekoff took the lead for good over a three-hole stretch, the 14th, 15th and 16th holes, with a birdie-par-birdie run that saw him turn a one-stroke deficit into a two-shot lead. Parrish went par-bogey-par over those holes.

Barzekoff added it was his putting that turned everything around.

“I finally started rolling the putter well,” he said. “I finally saw a couple of 15 footers drop and that’s what wins golf tournaments.”

He added another birdie on the 17th hole made the trip down the 18th a whole lot easier.

Barzekoff, who played two years of high school golf at Palo Verde in Vegas before finishing high school in Arizona, is honing his game for a shot at a pro career.

He said this three-day event has him trending in the right direction to make that a reality.

“I’m still thinking I’ll look at it next summer,” he said of his plans. “I will be 22. I just want to keep grinding and playing big events and getting better. Eventually I will be there.”

In the meantime, he knows what he wants to work on with his game.

“I definitely need to work on my putting inside of eight feet,” he said. “That’s my Achilles heel. It’s a mental thing. Put me at 15-20 feet and I will roll them in more often than from eight feet. Work on that and I’ll be a better golfer.”

Barzekoff tied for 7th in the 2020 Nevada State Amateur when it was played at Reflection Bay.

According to Barzekoff in a Review-Journal story about the State Am, this is his biggest win and he owes a lot to his father:

From the RJ – It’s the biggest individual title for Barzekoff, who was part of the state championship team at Palo Verde during his sophomore year in 2016. His father’s job took the family to Arizona after that, where he finished high school. He then headed off to Boise State, where he played for two seasons before his father, Wayne, got sick and he chose to leave college to come home to Las Vegas.

“He’s been my coach my whole life. He taught me everything from chipping to putting to ball striking,” Barzekoff said. “Whenever things start to go south, he tweets me up a little bit and I’m good to go.”

The Nevada State Amateur dates back to 1953 when Bill Higgins won the inaugural trophy. Over the years, some of the state’s top golfers including future PGA Tour pros Edward Fryatt and Craig Barlow, Las Vegas Golf Hall of Fame member Brady Exber, Steve Sheehan, Stephen Sear and others have won the coveted trophy.