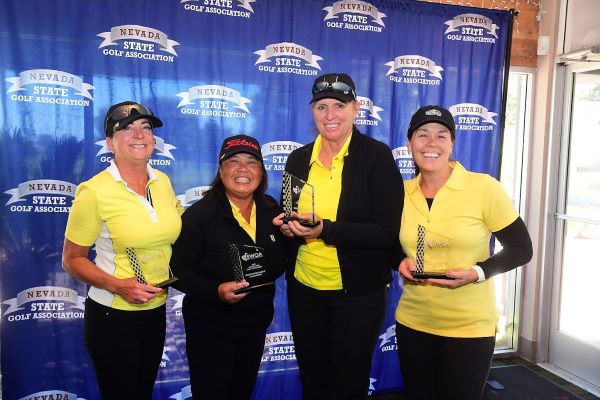 The format for the two-day event was two best balls per four-person team.

The team of Blake-Paulsen-Smith-Brandt put up eight birdies on the first day of the tournament to open a seven-shot edge and cruised to a 10-shot victory.

“We just had a great team…everyone contributed,” Blake said.

Teammate Paulsen added the chemistry of the foursome was perfect.

“We just all came through for each other,” Paulsen said. “If one or two of us were out of a hole, the others picked them up.”

Paulsen added that despite it being a group effort, there was no pressure on anyone.

“We had confidence in everyone’s ability,” she said. “And we were fighting for every par and birdie out there.”

Blake said both days were breezy but the second day provided more of a challenge because of one factor: the greens.

“Despite the wind we had eight birdies the first day,” Blake said. “But the second day the pin placements were a lot harder and I don’t think there were many birdies at all.”

Heading into the second day, Paulsen said the team had a simple gameplan.

“We wanted to maintain our lead,” she said. “That was our objective. And no matter the situation, no one on the team gave up on any shot.”

For the team of Phu-Hebert-Soscia-Hahn, it was a net eagle barrage that led them to the net title.

For the two days, the team put eight net eagles on the scorecard (each player had at least one net eagle and Phu had four) in posting a 28-under-par total and a six-shot victory.

Phu, the team spokesperson, said the teamwork paid off.

“We went in knowing we probably wouldn’t be competing for the gross title,” she said. “But we thought that if we played to our handicaps we could compete for the net and that’s exactly what happened.”

She said the team had a rough first day but not because of the golf.

“(Tuesday) was harsh,” she said. “We were not dressed for the occasion at all. It was so cold. But today we layered up and were all comfortable.”

Phu said the team had one goal going in to the event: Have fun.

“We try not to take it too seriously,” she said. “We had two players play better yesterday and two play better today. We just all worked well together and it paid off.”

In the end, Phu put it all in perspective.

“We’re not getting a million bucks,” she said with a laugh. “But we are playing for bragging rights.”