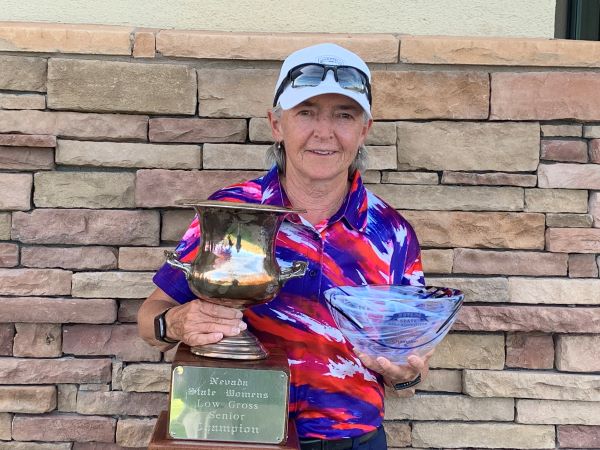 Ruth Maxwell, representing the Northern Nevada Women’s Golf Association and Round Mountain Golf Club, put four birdies on the scorecard over the two days in winning the gross division.

It was Maxwell’s second state title as she also won this event in 2017. In fact, she’s only played in two state events and is now two-for-two in them.

“It was definitely a challenge,” she said. “A lot of the top players all seemed to be struggling with shots and it resulted in scores being a little higher. There were a lot of quality players in the field.”

In the end, Maxwell said she relied on her past experiences to keep her in a positive frame of mind.

“In my golf career I’ve learned to just hang in there,” she said. “I try to accept the fact there are going to be bad shots. I just need to minimize the shots required to get out of trouble and take my lumps on that hole and move on. I know my ability will result in good shotmaking on other places on the course.”

She said coming down the stretch really tested her composure.

“I just tried to stay calm and stay focused,” she said. “I wanted to finish strong. That last hole is a very tough driving hole and I knew I had to hit a good drive. If you mishit a drive there you can be looking at a big number. I was just focused on getting a good drive and hitting the green with the second shot and making a par…which I did. I’m really happy to successfully play the last hole as well as I did.”

Her two closest opponents had a front-row seat to her victory.

“Playing against Ronda (Henderson) and Christy (Atencio) really makes you concentrate,” she said. “They are both great competitors and I knew I couldn’t let my guard down. It’s always great to compete against some of the best players in the state.”

Vickie Myers, who plays out of the Las Vegas Paiute Golf Resort and represents the WSNGA, had five net eagles en route to a six-stroke victory in the net division.

She said her game the first day carried her.

“I had the driver working and putted very well the first day,” she said. “And I carried that momentum over today.”

And that momentum started on her very first hole of the day.

“The 18th was our first hole of the day,” she said of the shotgun start. “I got a lucky bounce and made a par on the hole. I hit the rocks in the creek and it bounced across and wound up in the fairway and I managed to get it up and down.”

“I was close to giving up golf,” she said. “Then I started with a new instructor (Justin Marsch at Boulder Creek) and he’s helped me turn it around.”

She said the net eagles were a bonus for her, but it was her scrambling that she was most happy with.

“I have bad holes, that’s why I’m a 20-handicap,” she said with a laugh. “It helps when you can play well without your ‘A’ game and I did that. I scrambled well and pitched and putted well. That can make up for not hitting a lot of greens. It helped me save strokes.”