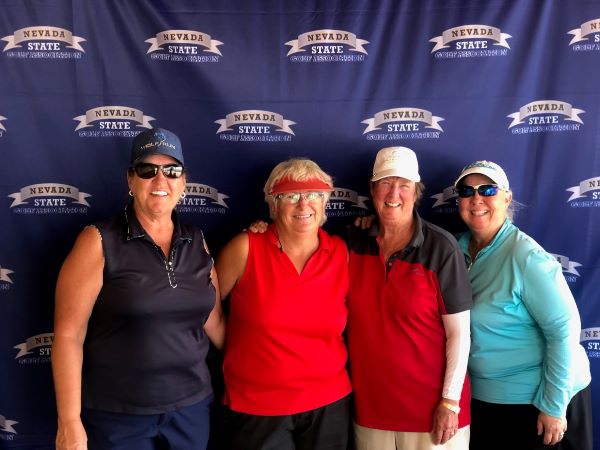 The 36-hole tournament was a four-person, two best balls event.

The foursome of Streeter, Colwell, Bower and Campbell put 14 birdies on the scorecard over the two days and breezed to a 25-stroke victory. The team represented the Northern Nevada women.

“We got off to a great start,” Streeter said. “We led by 17 after the first day. We all really played well and made sure to pick each other up if anyone ran into trouble.”

Streeter said it was a definite team effort over the two days but she added the play by Campbell definitely stood out.

“She was just amazing,” Streeter said. “Her first round was a 72 and the second day she shot a 71…her age. That’s just incredible.”

Streeter said the age-shooting round came down to the last hole.

“She always keeps the scorecard,” Streeter said. “She said all she had to do is make this last putt and she would shoot her age. She was pretty excited. She had a 12-footer and after the ball went in we just all cheered. We won the tournament but this was an amazing moment. Plus, she was coming off hand surgery. I guess it’s true…beware of the injured golfer.”

In the end, Streeter said it was business as usual for the team.

The team of Jones, Kicker, Gephardt and Wade, representing the WSNGA, posted five net eagles over the two days in winning the title.

It was the second straight year this foursome won the state quad crown.

“We won it last year at Primm so it was a repeat for us,” Jones said. “We’re used to playing with each other and we all played very well this week. It’s just a great type of event and fits us.”

Jones added the key to this event is simple: Always have two people in play.

“I’m the high handicapper so I usually went first and tried to get it in play and then let them rip it,” she said. “They hit the ball a long way.”

Jones added the group had a three-stroke lead after the first day but the pressure was still there.

“We tried to be aggressive,” Jones said of the second-day thought process. “The first day we messed up on a couple of early holes and we wanted to do better on them the second day. We started on 18 and it’s a tough hole. Tammy birdied and RaeAnn parred it. Whew, it was a good way to start the day and we just played solid the rest of the way.”

And having five net eagles over the two days didn’t hurt either.

“They were certainly a nice bonus,” Jones said. “We only wound up winning by two so we needed every stroke.”