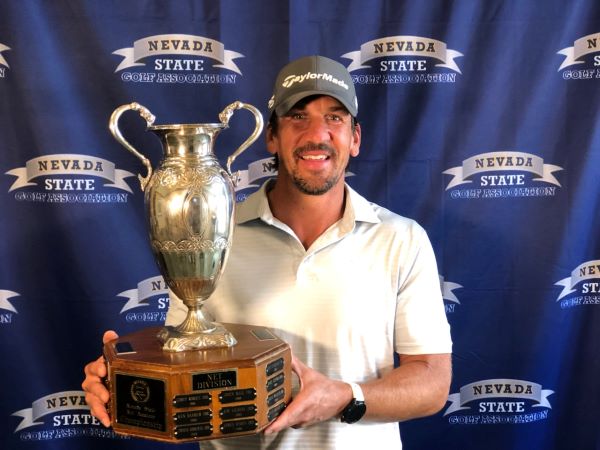 Aaron Bartels won his first state title by beating Jacob Haas 3-and-2 to win the 2021 Nevada State Net Amateur Championship. The tournament was played on the Lakes Course at Genoa Lakes Golf Resort on Aug. 13-15, 2021.–by Bill Bowman, www.LasVegasGolfInsider.com staff

Bartels, from Las Vegas, admitted he didn’t know what to expect in his venture north.

“It was the first state event I’ve played in,” he said. “I’ve been working hard on my game with Bob May and been playing pretty well lately. I’ve finished well in a few SNGA events and felt like I was ready to test myself on a bigger stage.”

Bartels came into the match play portion of the event ranked No. 4 after 36 holes of stroke-play qualifying. He dispatched Richard Florez 4-and-3 in the quarterfinals before earning a spot in the title match with a 1-up win over top-seeded Cecil Collier.

“This weekend I wasn’t going to let mental blocks hold me back,” he said. “The first day (of stroke play) I shot 78 and the second day I shot 71. That was the first time I’ve broken par in gross. It came down to me not thinking about breaking 80….or even that mid-70s was good enough.”

In his semifinal match, Bartels opened with two birdies and two pars and went 4-up only to see Collier battle back.

“It just goes to show you that you’ve got to stay focused,” he said. “Cecil came back well and it was tough but I managed to win.”

The finale didn’t start off the way Bartels had hoped as he dropped the first three holes of the match to Haas.

“The final was just about the opposite,” Bartels said. “I was three down after three holes but said to myself that if Cecil can come back, so can I.”

He got back to even as they made the turn to the back nine. Haas won the 10th hole before Bartels won the next three holes.

Haas wasn’t through though and won the next hole to get back to 1-down before Bartels won the next two holes to close out the 3-and-2 victory.

“For the first 12½ holes, we were both playing lights out,” Bartels said. “Then he struggled a little coming home.”

Bartels added the tournament has given him new-found confidence.

“In the past I’ve struggled to put together full rounds,” he said. “I essentially let myself get in my way. This week I just kept playing one shot at a time and not worrying about the score.”

Now he may have his sights set on a new challenge.

“Maybe it’s time to play a couple of gross tournaments and get beat up by those guys,” he said with a laugh.