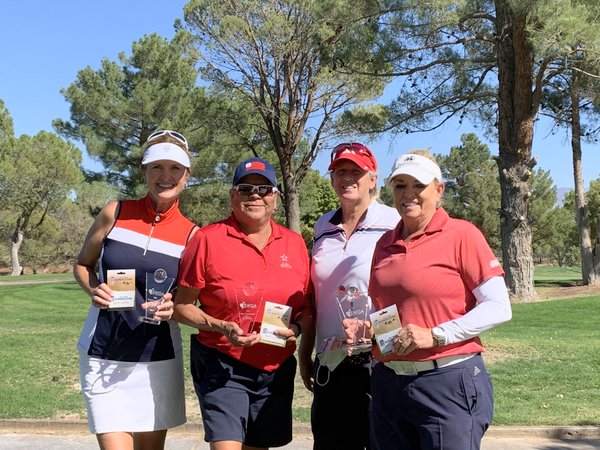 The format was two best-ball scores on each hole. The NSWGA State Quad Championship was first played in 2002.

Regina Quintero, Theresa Prospero, Debbie Love and Carrie Langevin put together rounds of one-over-par and three-over-par and cruised to a six-shot victory in the Gross Division.

The team got off to a quick start the first day and never looked back.

“The first round was really good,” said Quintero, spokesperson for the team. “We started right away with two birdies on No. 3 and that calmed everyone down. It was a good start and it continued throughout the day.”

Quintero said the overall format of the event fits the team very well.

“The good thing about this team is at some point everyone stepped up and helped out,” she said. “We’d have people have a bad hole and then bounce back with a good hole and that’s a big plus. Teamwork, especially on the greens, was huge for us.”

But there was one hole that got the team’s attention.

But, the team bounced back the second day with a total of nine, one-under-par, on that same hole.

“That’s a huge difference,” Quintero said. “You just have to take those scores with a grain of salt. No one let it bother them. You shake it off and move forward. That’s what this game is all about.”

The three top teams all shot a combined 129 the second day but it was the winners’ 130 total the first day that propelled them to the victory.

“We’ve played in the quads for quite a few years but this is the first time we’ve won,” said Wade, spokesperson for the team. “It was quite a nice surprise.”

Wade added the teamwork was key.

“We’re team players,” she said. “We have a lot of camaraderie and work well together. It really paid off.”

Overall, Wade added the second day did have a little more pressure.

“We knew we were in the lead this morning but not by much,” she said. “We knew there were teams chasing us. We were just hoping to hang on.”

And hang on they did.

“You have to be aggressive in this type of format,” she said. “We just played our own game and played steady.”