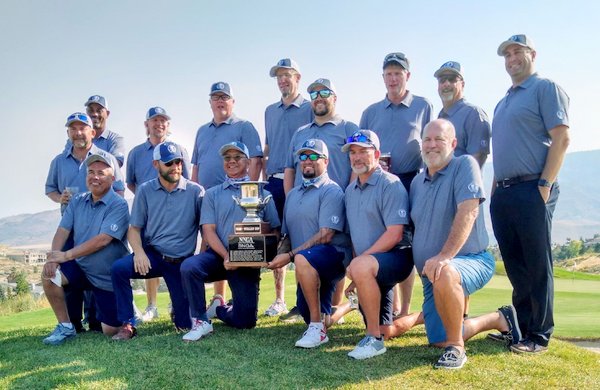 The Northern Nevada Golf Association keeps on rolling. The NNGA made it four straight Cobb-Whalen titles, breezing past the Southern Nevada Golf Association, 17-7. The event was held Sept. 28-29, 2020 at Somersett Country Club in Reno. But besides the competition, this event is as much about camaraderie. –by Bill Bowman, Las Vegas Golf Insider staff.

The NNGA team’s most recent win was also dominant, a 15-9 victory in 2018 when the event was held at Rio Secco Golf Club in Henderson, NV. Overall, it now stands with 6 wins to 5 for the SNGA, with one tie in 2012, which led to the South keeping the cup.

The tournament is played every two years and is named after Clyde Cobb and John Whalen who were both cornerstones in the early growth of golf around the state.

The event features 12 players each from the North and the South competing in three sessions. The first-day morning session featured four-ball play and was followed by an afternoon session of alternate shot. The final day was the singles portion of the tournament.

The North opened up a five-point lead after the first day, winning Monday’s first session 4-2 and the second session 4½-1½ to grab an 8½-3½ lead heading into the final day and the 12 singles matches.

The lead widened as the North put the first four points on the scoreboard in the singles matches and eventually won the session 8½ -3½ to retain the crown.

“I’ve been doing this since 2001,” said Steve Rydel, the North squad captain. “It was depressing losing all of the time. We finally won in 2004 but then we lost four in a row again. We then had a tie but they retained the cup. Now, we’re winning.”

He said the key is simple…at least for now.

Rydel said a couple of players really stepped up for the NNGA squad.

“Evan Shane and John Tover were huge for us,” he said. “Those two guys played two years ago and they were a nervous wreck. It took everything I had to talk them down off the ledge.”

This time was different.

“It looks like a runaway, but they got us two big points that gave us a little cushion going into today,” Rydel said. “If they hadn’t gotten those points, it could have been a different outcome.”

South team captain Tim Brand admitted, like Rydel’s squad in the early days of the Cobb-Whalen event, the team’s makeup definitely played a factor in the outcome.

“We had some first time players and they were a little bit nervous with it being their first time in this event,” said Brand. “(The North) typically doesn’t have a lot of turnover and probably 10 of them played two years ago at Rio Secco. They typically throw out the same teams and are used to playing with each other. That certainly helps.”

Brand said it was still a good learning experience.

“Some of our guys felt like they gave a few holes away and that always hurts,” he said. “But there were other times our guys said they played really well and just got outplayed.”

Overall, Brand added the team had a good time–despite the loss.

“Our guys always have fun with the Northern guys,” Brand said. “But now our newbies are going to do everything they can to get back on that team.”

The qualifying played a major role this year as two players used finishes at Cascata in the final qualifying event to earn a spot on the team this year.

“Bryan Carlon, who went 3-0 for us, wasn’t even in the top 12 heading into the final qualifying event,” Brand said. “He had to finish in the top 10 and he did. And Nate Ross, our 2018 Player of the Year, went 2-1 for us. He moved to Oklahoma in 2019 and over the past year and a half flew back into town for events to try and qualify. He flew in to Cascata and needed a top-four finish to qualify and did. He was our 12th man.”

In the end, Rydel said the event is one that just lets players show their stuff.

“We really try to make sure the matches are close,” he said of the handicaps. “If you’re an eight, you’re playing someone who’s an eight…or a seven…or a nine. You try not to make it so one player is getting 10 or 11 strokes because in the end, it’s just bragging rights. We’re all out here to play golf and have a great time.”

The 2022 Cobb-Whalen event will be held in Southern Nevada. The date and course have yet to be determined.