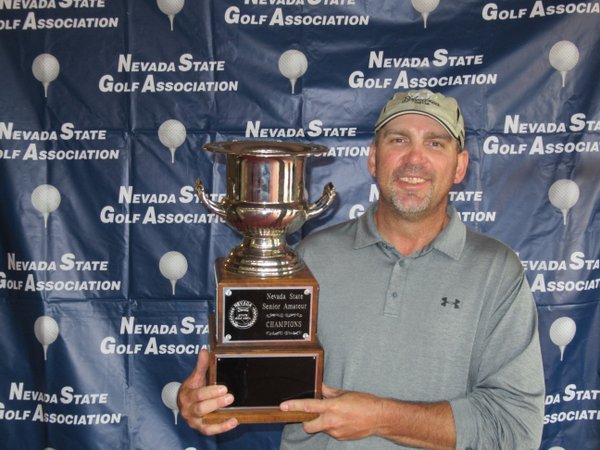 Joe Peroglio won the Senior Division in a cakewalk thanks, in part, to a red-hot start during Sunday’s first round.

He was five-under-par through his first nine holes and then added an eagle at the par-5 10th en route to an eventual five-stroke victory. Peroglio, representing northern Nevada, led by three after the first day and kept expanding on the lead. 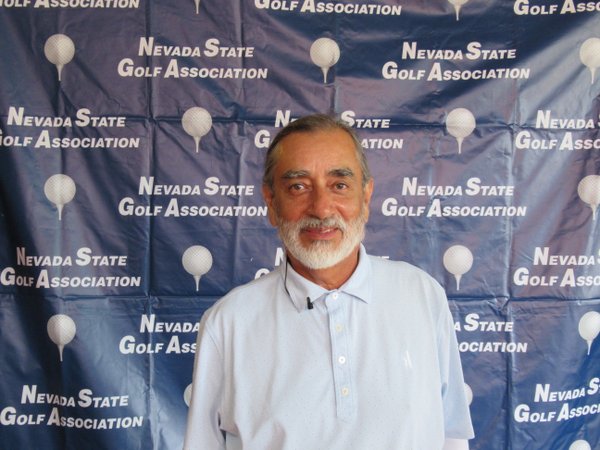 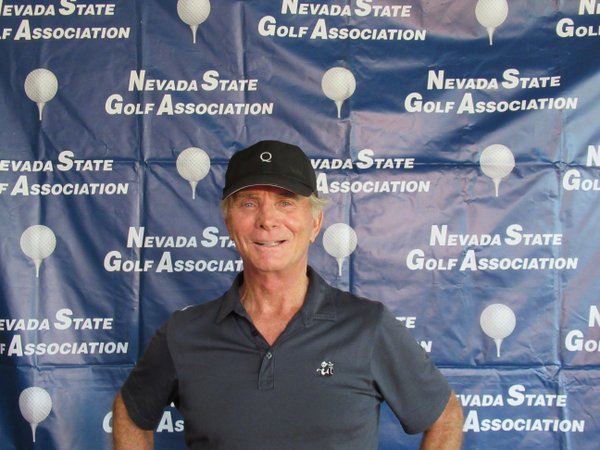 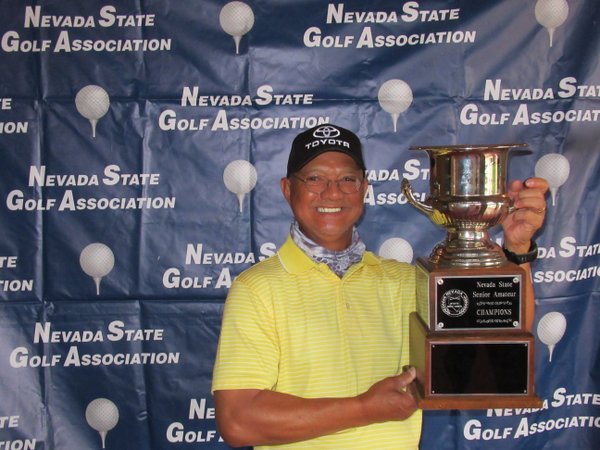 It was Peroglio’s first state title.

“I was just feeling it the first day,” Peroglio said. “I was staying in the moment…taking deep breaths…swinging smoothly. It all worked out. I was hitting it well and the putts went in. When everything’s working well, you can shoot low.”

But, there were some worrisome moments.

“I just wasn’t feeling it early,” he said of the final round. “My swing wasn’t smooth and crisp. I was kind of flailing at it.”

The round started off with a double bogey on the third hole and a shot into the water on the sixth.

“I was reeling,” Peroglio said. “I started talking to myself a lot trying to talk myself into getting back into it.”

“I thought if I got through the ninth with a par I could get things going on the back,” he said. “I birdied 10 and 11 and got myself in a positive frame of mind.”

In his early playing days in the 90s, Peroglio played in the Nevada State Amateur at this same course. “I shot something like in the 80s,” he said. “It wasn’t very good. To come back here so many years later and win is really cool.”

William Duenas had all three rounds at par or better in posting a four-shot victory in the Senior Net Division.

Duenas, also representing northern Nevada, had opening and closing rounds of one-under-par 70 with an even-par round of 71 in the middle.

“My goal was just to make as many pars as I could,” Duenas said. “I don’t make a lot of birdies so I just tried to plug along and make pars and hope that it holds up.”

It did and he’s now a two-time winner in state events as he also won the Nevada State Net Amateur in 2017.

He said his game was solid from tee to green…but on the green, well, that was another story.

“I was hitting the ball really well,” he said. “I hit a lot of fairways and my iron shots were good, too. But my putting wasn’t working out. I only made one birdie.”

But on the bright side, his par putts were mostly stress-free.

“I had a lot of tap-ins for par so that made things a lot easier,” he said.

Heading into the last day, he knew right where he stood.

“I was confident but I knew there were a lot of good players coming after me,” he said. “My goal was to stay away from the big numbers and I did that. I’m just glad the driver kept working. It took a lot of pressure off me.”

It turned out that 54 holes wasn’t enough to crown a champion in the Silver Division.

For Pool, who won the Senior Division gross title in the SNGA Championship back in March, it was his first Silver Division amateur state title and follows three Senior Division state amateur titles, the most recent one being in 2015.

“My goodness, it really started to slip away on the front side,” Pool said. “I was two over and then made a couple of birdies but then made a double on No. 9 so I was a little upset.”

He steadied his play early on the back nine before the par-5 16th bit him.

“I hit a good drive but wound up on a sidehill lie,” he said. “I knew I had to hit it left but I hit it right…right into the water and my opponents both made birdie.”

He then wound up bogeying the 18th hole to get into a tie with Turk.

“I missed about a six-footer for par and then all of a sudden we’re in a playoff,” he said.

The playoff lasted until the third hole.

“The wind was howling,” Pool said. “John hit it in the water. I hit my shot 40-feet long and two-putted for the championship.”

Despite the final day hiccups, Pool said his overall play was solid.

“I did let a couple of shots slip away,” he said of the final round. “I also had a few mental errors and missing a three-foot putt…things you really shouldn’t do. I didn’t hit that many bad shots but then, lo and behold, we’re tied.”

He said he’s now going in search of a little help.

“The way I finished, it kind of shattered my confidence. I may have to go to a shrink,” he said with a laugh. “But it just shows that if you’ve got a big enough lead you can gag it a little and still win.”

Dario Gonzalez is no stranger to winning SNGA titles as he has two wins in 2020.

Now, he can add state champion to that resume with a victory in the Silver Net Division with a seven-stroke victory. It was his first state title and it’s the first time he’s played in a state event.

“This is the best I’ve ever done,” the southern Nevada representative said. “I played very consistently and didn’t let it get out of hand.”

He said things could have gone sideways easily during the final round.

“Today on No. 9 I could have made a triple bogey,” he said. “I made a 16-foot putt to make a double bogey. Each day I had a double bogey but I made a couple of birdies to cover up the bad holes.”

As with many players, he pointed to his putter as the key.

“It’s kind of funny,” he said. “Because of what’s been going on (COVID-19), I’ve just been practicing…a lot. And I’m one of those people who hates to practice but that’s all that’s been available.”

“I think all that practice has just kept me in the game,” he said. “It let me keep that feel of the game. If I don’t practice and don’t play, the game just goes away. But this week I felt comfortable swinging and getting putts lined up because of the practice. It all paid off.”

He did add that he had one hole that really let him know things were going pretty well during the week.

“There are two par 4s out here that are both close to 300 yards,” he said. “And one of them played less than 300 yards yesterday. I was going to lay up but duffed my tee shot. I had to hit a 5-iron into the green but still made birdie. It just shows you what an interesting game this is. When things go bad, you’ve just got to hang in there and never give up.”