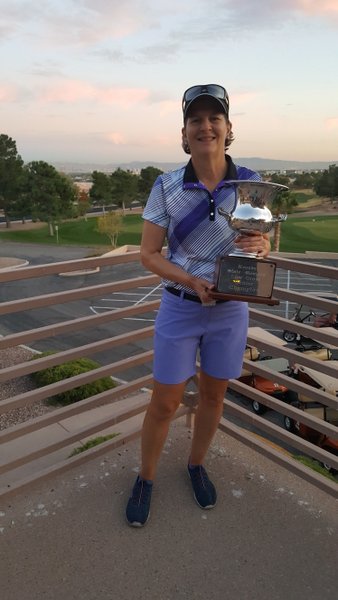 Ronda Henderson rallied from a two-shot deficit after the first round and walked away with a four-stroke victory in the Gross Division. It was Henderson’s first individual state title.

“I won a partners title a few years ago and a state quad a few years ago and the team event with the Silver Cup but this is my first individual title,” said Henderson, a self-employed entrepreneur in the event services field. “It’s pretty exciting.”

It’s also an event she’s been building up to.

“I qualified for the U.S. Senior Women’s Open this summer and that really helped me in an event like this,” she said. “I missed the cut there but to play among the best women golfers boosted my confidence a lot.”

Henderson trailed by two strokes after the first day, but there was no worry in her voice.

“I was OK being two strokes back,” she said. “I’m a much better chaser than a leader.”

The second day saw her iron play take center stage as she battled back.

“I was pretty wild with my irons the first day,” she admitted. “(Wednesday) I laid up to have fuller shots into the greens and my misses resulted in putting from off the green rather than having the pitch shots I had the first day.”

She did admit she changed her game plan down the stretch as the pressure mounted.

“I was up a couple of shots with four or five holes to play and I changed my approach,” she said. “I tried to look at it like match play and that helped me control the nerves.”

In the end, it came down to her philosophy.

“I always tell myself the same thing,” she said. “It comes down to patience, playing with confidence and trusting myself. I trusted myself and had eight or nine one-putt greens today so that definitely helped.”

Sigrid Schacher put together a sizzling second round to breeze to a six-stroke victory in the Net Division. It was Schacher’s second state crown.

“I just played good golf and had fun with the golf course,” she said.

She said her second round improvement was a group-related endeavor.

“The first round our group all struggled a little in the middle,” she said. “Today everybody played good golf.”

Her key was staying out of trouble. “My drives were straight and I didn’t have any problems in the bunkers,” she said. “And my approaches were good. I had three birdies today and I actually played really good.”