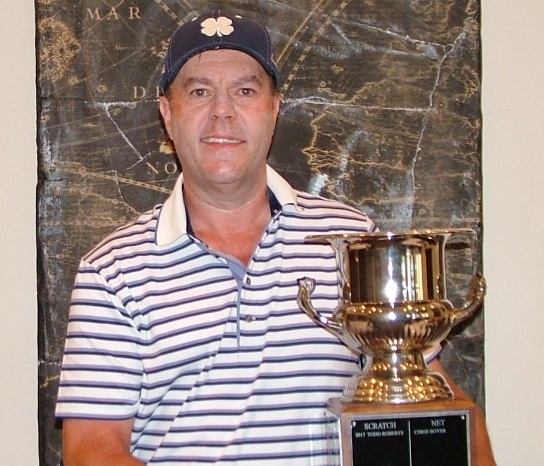 RENO, Nev.–Todd Roberts made it two straight Nevada State Senior crowns, winning the 2018 event by four strokes over David Nelson. But, he admitted it took a phone call to a friend for a little help with his putting before he walked away with the title at Somersett Golf & Country Club in Reno, Nev. Frank Abbott was also a repeat winner, picking up the Silver Senior gross crown for the second straight year. — By Bill Bowman, Las Vegas Golf Insider staff.

But, it was anything but easy.

“It’s all about putting for me,” Roberts said. “I just got back from Winged Foot and I putted horrible there. I putted bad in the first round here and then I talked with Brady Exber on the phone and told him how uncomfortable I was. He said ‘There’s no rules for putting. Get comfortable with what makes you feel good.’ ”

The second day Roberts had two three-putts early in the round but “I stayed with it. I just tried to stay loose and I have to give Brady the credit for settling me down.”

The result was a four-under-par 68 that saw Roberts play the final 11 holes of the second round in 6-under-par with four birdies and an eagle.

The finish gave Roberts a one-shot lead heading into the final round, but a hot start by Nelson saw Roberts trailing through the first seven holes.

“David birdied three of the first five holes and was really playing well,” Roberts said. “I just tried to keep chugging along.”

A double bogey on No. 7 by Nelson got the two back to even terms heading to the back nine.

Roberts birdied No. 11 from two feet and sealed the deal with a birdie on No. 17 while Nelson bogeyed the hole.

“I thought (winning a second title) would be easier,” Roberts said. “But Dave Nelson is such a tough player. It was a dogfight and I thought I handled the pressure better.”

Roberts said his ball-striking has been solid and is the key to his success as he hit 14, 15 and 16 greens, respectively.

“I’m hitting the ball really well and not getting in trouble,” he said. “I just have to get a little more offensive minded with my putting. I feel like I can do some good things the rest of the year. I’m getting much more relaxed.”

Jason Buckholz, out of Wolf Run GC, had to hold on for victory in the Senior Net division.

“It was a struggle today,” Buckholz said. “My chipping was adequate and that’s about it for today.”

He did finish with a birdie on the 18th.

“I had all my bad strokes on the back nine,” he said. “The first two days I played the back nine 1-under. Not today.”

He added he played just well enough to win.

“I played just well enough to keep it together,” he said. “Some days you just have to grind and today was one of them. Some days are easy and other days are a grind. Easy days are much better.”

This was his first Senior Net title after winning the Nevada State Amateur Net crown three times in 2012, 2014 and 2016, winning state events in even number years.

Frank Abbott, representing Canyon Gate Country Club, also made it back-to-back championships as he won the Silver division by four strokes. It is also Abbott’s third Silver victory in the last four years.

“I haven’t been playing that well this year but this one helps out,” Abbott said. Abbott won 11 times in SNGA events in 2017 but had only one win in 2018–until this week.

“I hit the driver really well,” Abbott said. “That’s my game…hit it down the middle, make par and then every once in awhile make a birdie.”

“I just try to keep it around par and let other people blow up,” he said. “John Garrett had one bad hole and that kind of swung things. I could have been three or four strokes better but I couldn’t have been much worse.”

For Brian Richards, it was a case of home cooking.

“I think I was the only Somersett member to play so I had a little local knowledge and that comes in handy,” he said of his victory.

“I played really well all three days,” he said. “I only had one bad hole where I had an eight. I was like ‘Oh my God, I can’t believe I just did that.’ But after that I focused again and played good golf.”

He said advice from a pro has been a big boost to his golf game. “One of the golf pros watched me hit two shots,” he said. “He asked me if my vision was OK. It was kind of embarrassing because it wasn’t and I wound up having cataract surgery a month later. Now all is well.”

Well, except for that 8.

“That 8 will be on my mind for as long as that trophy is on the wall,” he said with a laugh.