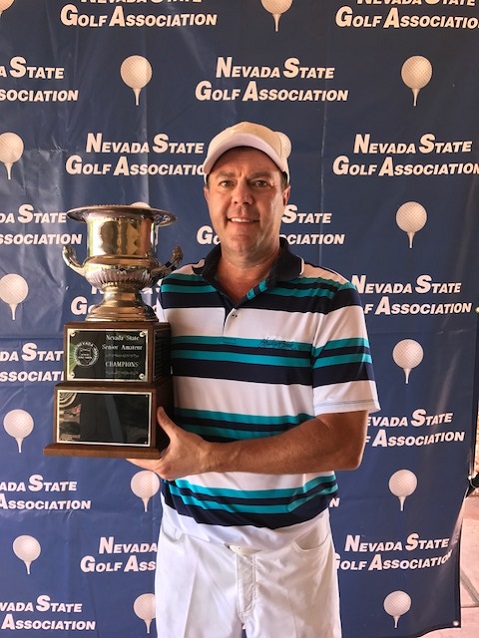 LAS VEGAS, Nev. (Aug. 21, 2017)–It may seem weird that back-to-back-to-back bogeys could motivate a golfer, but that’s exactly how Todd Roberts looked at his situation in the gross division of the 2017 Nevada State Senior Amateur. He overcame a stretch of those three-straight bogeys and wound up with a one-shot victory over Cyrus Whitney. The tournament, played Aug. 18-20, 2017, was held at the iconic Las Vegas National Golf Course. Frank Abbott won the Silver gross division, Chris Boyer, net division, and Jim Burger, Silver net division. — By Bill Bowman.

Heading into the final round of the three-day event, Whitney (+1) held a two-stroke lead over Roberts (+3). It was another six shots back to Kelly Knievel (+9) so it was basically a two-man race with 18 holes left.

And to make it just a little more interesting, Whitney and Roberts headed to the 10th tee all square.

“I bogeyed 10, 11 and 12,” he said. “I missed a short putt on 10 and that bugged me. But, it kind of motivated me to get going. I tried to stay patient and Cyrus got into a little bit of trouble and the next thing you know, I’ve got the lead.”

His putter was the key down the stretch to help turn things around.

It was his first win in a Nevada State Golf Association event, but not for lack of trying.

“Three years ago in Reno I made a seven and missed out on the playoff by a shot,” he said. “Then last year I had a three-shot lead with two holes to go and blew it. This year I knew I was in pretty good shape on 18 if I didn’t do anything stupid.”

Chris Boyer battled from behind to win the Senior Division-Net crown. Boyer trailed by six shots heading into the final round before firing a 70 to win by a stroke over Andy Vesco.

“I hit the ball much better today,” Boyer said. “I got up and down a few times and made a few putts. It worked out to be a good day.”

Boyer took a 3 ½-year break from SNGA events and this is his second event back. He was sixth in the Cascata event.

“It’s good to get back into tournament golf,” he said. “It gets everything going…it’s a different feeling.”

Frank Abbott kept up his red-hot pace in the Silver Division, winning for the 9th time in 2017. He breezed to the title, winding up with a 10-stroke victory. He led by six shots after two rounds and coasted on the final day.

“The course played pretty difficult,” Abbott said. “But I did play the par 3s under par and they are very strong here. I made most of my birdies on the par 3s. I hit a couple of them pretty close, had one chip-in and a long putt.”

He said this were definitely the difference in his victory.

“You put enough 2’s on the scorecard, your score gets better in a hurry,” he said.

Jim Burger carded a sizzling 66 on the final day to stage a come-from-behind one-stroke victory in the Silver Division-Net.

“I improved a little every day,” Burger said. “I was five shots back starting the day. I played pretty good golf and made up the difference and managed to win by one.”

For Burger, his putting was the story.

“I had nine one-putts today and 28 total putts,” he said. “That’s generally the difference in my game.”

Burger has been battling through injuries. “I had some surgery and had to sit out a couple of months,” he said. “I’m trying to get my game back together.”