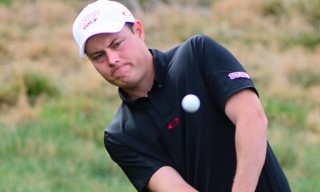 When it came down to it, one former UNLV golf star and one current UNLV golf star hit the course at TPC Las Vegas to settle the 2015 Nevada State Match Play Championship. And, this time, youth prevailed. AJ McInerney, the 2015 UNLV Golf Captain, took down former UNLV All-American and PGA TOUR player Edward Fryatt 3 and 1 in the final match.

McInerney was a senior-to-be at UNLV when he won the tournament. He played in six tournaments as a junior during the 2014-15 season, recording his best finish at the Gene Miranda Falcon Invitational in Colorado Springs, Colo., when he tied for second. He also finished tied for 21st at the NCAA Regional in Noblesville, Ind. He recorded three rounds in the 60s last season, with a low round of 65 in the second round of the Southern Highlands Collegiate Masters in Las Vegas.

Fryatt was the top seed entering the Nevada State Match Play tournament and has enjoyed his “second” amateur golf career. Fryatt earned back his amateur status recently and was the overall point leader for the 2015 Southern Nevada Golf Association, making him its 2015 Player of the Year.  “It was a lot of fun while it lasted,” said Fryatt about the run to the Nevada State Match Play final when it was all over.

At UNLV, Fryatt was a three-time All-American during his UNLV career that spanned from 1991-94. He won the Big West Conference’s 1993 Player of the Year award after capturing the league’s individual championship. He graduated from UNLV in 1994 with a degree in business management.

During his professional career, Fryatt won four events internationally and was fully exempt on the PGA TOUR for three years, earning more than $1 million. The 2015-16 UNLV men’s golf season will begin on Sept. 18 at the Olympia Fields / Fighting Illini Invitational in Olympia Fields, Ill.

TPC Las Vegas is known as the home to professional golf in Las Vegas and is a former host of events on both the PGA TOUR and Champions Tour. Several PGA TOUR pros who live in Las Vegas, including former Rebel golfers Charley Hoffman, Bill Lunde and Ryan Moore, play and practice at the course during down time from tournament golf.