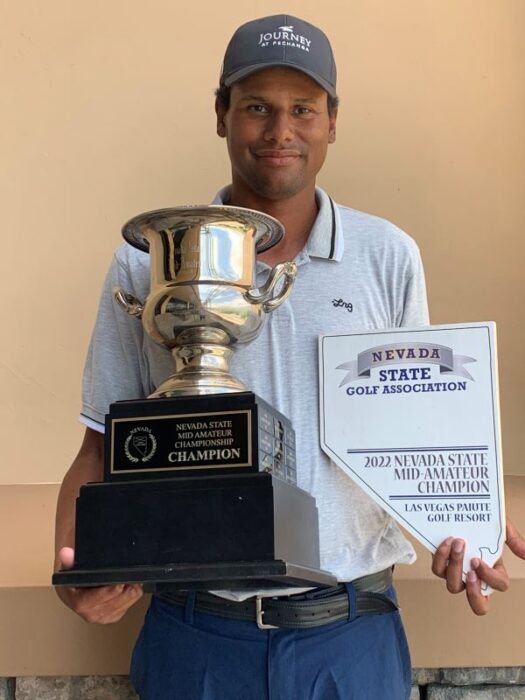 Losarah birdied four of his final six holes during the second round and two of his first three holes in the finale en route to the crown. For the tournament he put 16 birdies on the scorecard compared to just five bogeys. Tanner Johnson was second.

Losarah is a math teacher at Chaffey Junior College in Rancho Cucamonga, CA. He won the SNGA’s Primm Valley Amateur in February.

He said this win definitely boosts his confidence level.

“This one is right up there with my SCGA (Southern California) Match Play win,” he said. “It came against a good field and I just played solid all three days.”

He said the victory also showed he can win as a front-runner as he managed to keep his lead throughout the event on the Pete Dye-designed course.

“It was nice to be able to go wire-to-wire and win,” he said. “Sleeping on the lead isn’t easy and it’s good to get one of those under my belt.”

He said his driver is coming around and really helped over the three days.

“Since the last time we talked I made a swing change,” he said. “I was struggling with the driver and after this change my driver has now become one of my strengths.”

He added his consistency over the three days was big.

“The first day I got off to a good start and had a good finish,” he said. “The middle was a little shaky but still pretty solid. The second and third rounds were similar in that I bogeyed both the eighth and ninth holes but had good back nines.”

“I wasn’t happy,” he said with a laugh. “And they aren’t that difficult. I three-putted on No. 8 from 12 feet…and uphill. That was a little frustrating.”

He took no time when asked if there was a shot or a hole that made the difference in the tournament.

“No doubt it was No. 13 today,” he said. “I hit a thin tee shot into the desert on the driveable par-4. I ended up hacking it out of the desert and then chipped it up to about 15 feet. Tanner Johnson was two strokes back but was in close for an easy birdie. I made the par putt to stay one stroke ahead. That was huge.”