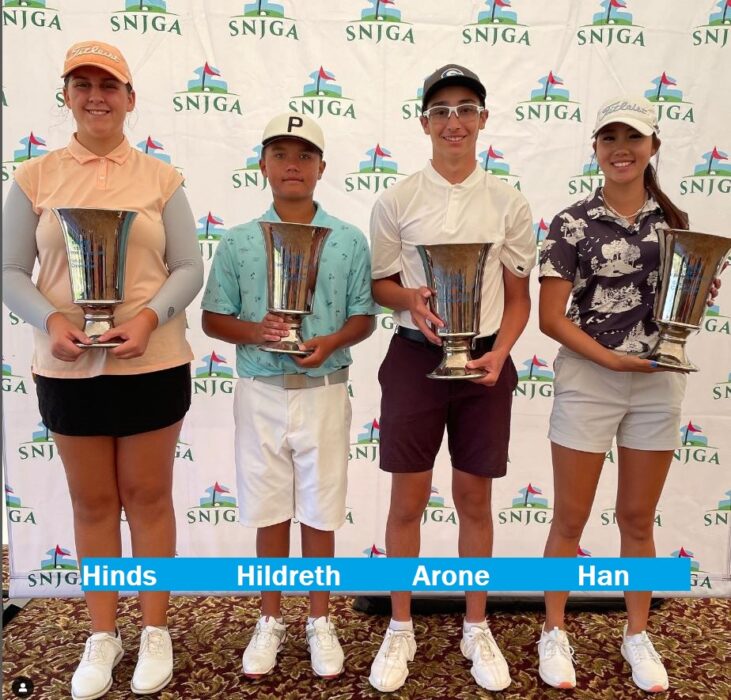 Winning a state title is at the top of the list for any golfer and Emmerson Hinds, RJ Arone, Eunice Han and Tripp Hildreth accomplished that goal with wins in their divisions at the 2022 Nevada State Junior Amateur played at Boulder Creek Golf Club in Boulder City.

Han won the Girls 14-15 division with a stellar total of 4-under 140 to defeat Natalie Cheong by two strokes. Dakota Tallent was third at 2-over par.

“I had the opportunity to win the Nevada State Junior Amateur championship today with a two day total of 140. (73/67) thank u to snjga and to boulder creek for allowing me to play here in wonderful conditions. next stop: world stars!”

Arone had a blistering two rounds of golf and finished at 11-under 133 to win the Boys 15-18 division by seven shots over Caden Gambini. Lukas Taggart was third.

Arone, who plays at Bishop Gorman, played one four-hole stretch five-under-par with three birdies followed by an eagle and said it was the best golf he has played in a tournament.

“Caught a W in the Nevada State Junior Amateur with a 2 day total of -11 and by far my best tournament yet. I’d like to thank snjga for running a great tournament and Boulder creek for letting us play there. I’d also like to thank my fellow competitors, it was a lot of fun out there and it was because of you guys, and to my parents for making this all possible. Onto the next.”

Hinds won the Girls 13-14 division and finished at even par to run away with the victory.

Hinds had five birdies in round two through 17 holes before double bogeying the final hole, her only blemish.

“This one was on the calendar for a year. There were big nerves because she wanted to protect her house. -3 under today, even for the tournament, and a resounding win. Thank you to @snjrgolf to Boulder Creek … for making the place look and play great.”

Hildreth also played outstanding golf to finish at 6-under 138 and four shots clear of Jack Cook and win the boys 13-14 division. Elijah Marshall was third.

Hildreth birdied three holes (5th, 6th and 16th) both days in his victory. One other hole, the 13th, he went eagle-birdie.