Gary Carpendale birdied two of his final four holes en route to a two-stroke victory in the Senior Division.

It was Carpendale’s first state title.

“I can’t believe I won it,” Carpendale said. “I’m really excited about it. I hung in there and chipped it around and made some putts when it wasn’t going well.”

This win was the result of consistent play. For the three days, Carpendale put 12 birdies on the scorecard and just six bogeys.

“It was really the putter that saved me,” he said. “I hit the driver good the first two days but my irons, to tell you the truth, were horrendous. But the putter kept saving me.”

“It feels bigger, that’s for sure,” he said. “There are more guys around and the three days makes it tough. It really whittles down people’s games when you make them play three days.”

And he said the heat was no bargain.

He was trying to hang on in the final round but ran into a stretch of bad holes. He said then it was time to get it in gear.

Those putts brought him back to a positive frame of mind.

“I felt real good about rebounding after struggling for a few holes,” he said. “I told myself it was time to get in there and make something happen.” 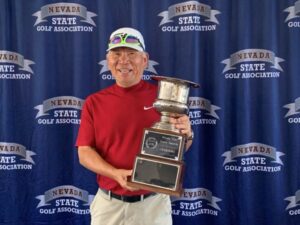 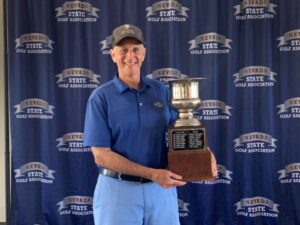 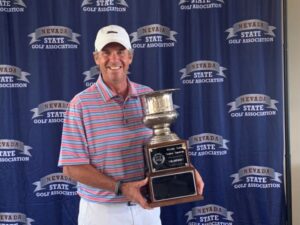 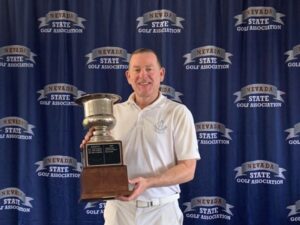 Jim Licausi won his second Nevada State Senior title in the last three years, both of them net titles.

Overall, it was his fourth state crown–three state amateurs (including the overall state title in the net division in 1995) and one state match play crown.

This one showed him he’s still got the fire.

“Winning never gets old,” he said. “That’s why we’re out here. We’re still competitive even at our old age.”

He said he played solid golf but had a few hiccups to overcome in the final round.

“The last round was a struggle,” he said. “I just tried to dig deep and make pars. It didn’t look pretty but in the end I got the job done.”

He said one shot in particular stands out and was definitely the turning point.

“On the 15th (a par-3), I hit it in the bunker and it wound up next to the lip,” he said. “It was an almost impossible lie…it was downhill and down grain. But somehow it came out like a marshmallow and wound up right next to the pin. There was no way to stop it so I guess there was definitely some luck involved.”

While he loves to win, he still has his sights set on a gross crown.

“Any time you win an event like that it boosts your confidence,” he said. “But I would sure like to win a gross event. Those guys are really good players and if you beat that crowd you are playing very well.”

Steve Fink made it nine victories in 10 events in 2021, but this one was special…another state crown.

It was his third state title in a Las Vegas golf career that has spanned 20 years in Nevada.

“I’m ready to collapse,” Fink said, “This was a tough three days.”

Fink said he didn’t do anything spectacularly well but just played solid.

He also had a first for his career.

“The first two days I didn’t have any bogeys on my card and that’s the first time I’ve gone two rounds without a bogey,” he said.

But just as quickly, reality set in.

“I had a double bogey on my third hole in the final round and then a bogey on the next hole so those hurt,” he said.

In the end, it was a two-man race as Fink and John Turk were battling it out.

The par-5 second hole (their 11th hole of the final round) turned out to be key.

“I chose to lay up and John went for it in two,” Fink said. “He put it in the bunker but then hit it to about five feet. I hit it about 45-feet past the hole on my third shot but then canned the putt for a birdie and he missed his birdie putt. That was a definite turning point for the momentum.”

David Kim is back in the winner’s circle…three years later.

Kim’s last victory came in a 2018 SNGA Tour win and was one of three victories in that season.

Now he’s finally a state champion and to say he is happy with the victory would be an understatement.

He said his win proves–especially to himself–that age is just a number.

“Now I’m 80 and I thought it was almost impossible for me to win,” he said. “That’s why I’m so excited. I hit a lot of fairways and that made the rest of my game a little easier. And everything was one or two putts and I even had five or six birdies.”

He said that while it is his first state championship, he’s hoping it’s not his last.

“Next year I want to go for the gross,” he said with a laugh. “I have the enthusiasm for it and the hard work. I’m excited to keep going. I want to be interviewed by you again next year as the 2022 gross champion.”