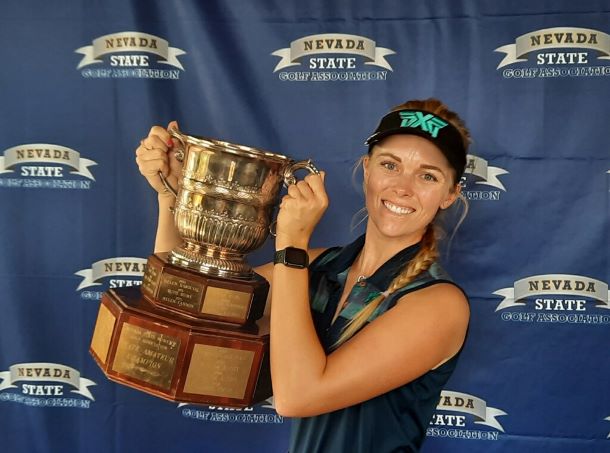 Veronica Joels put six birdies on the scorecard over her final nine holes (including five in a six-hole stretch) to win the title in the women’s championship division for the third time in four years. And Cristy Atencio (gross) and Robin Rakusin (net) earned Silver titles. –By Bill Bowman, LasVegasGolfInsider.com

“It was just an awesome day,” she said. “I got the putter working for me. I hit 17 of 18 greens so I just kept trying to make birdie putts. I made a par on 10 and then birdied 11 and then hopped on the birdie train.”

She said this weekend has her back in a positive frame of mind.

“I’ve played a lot of tournaments over the summer but haven’t had results I’d like,” she said. “It’s a little bit of a downer. It was nothing too dramatic but these two under-par rounds have really got me going in a positive direction.”

She added that despite the victory, she knows there were a few hiccups in the rounds she will work on.

“I didn’t finish well (Saturday),” she said. “I was three-under with three to play so there’s no reason I should have come in at just one-under.”

But, she didn’t let it bother her…especially when it came down to the wire.

“I knew I was tied on 18,” she said. “I figured I would have to birdie the hole or go to a playoff. Aliyah hit it to about nine feet so I figured I’d have to hit it inside her or make a long putt. I hit it to three feet and just said ‘let’s see what happens.’ She didn’t make her putt and I did. I proved to myself that I could handle the pressure. I wanted to perform and I came through.”

Christy Atencio posted a two-birdie, three-bogey second round to race to a five-shot victory in the Gross Division.

Atencio held a one-shot lead after the first round before her solid second round secured the victory.

“I played pretty solid,” Atencio said. “My go-to is my driver and I really drove it well.”

But she also got a little help on the greens.

“I’m usually hot or cold with the putter and I was very consistent this weekend,” she said. “I was making the testers when I needed to make them.”

“I hit a lot of fairways and greens and putted consistent,” she said. “It’s how I’d like to play more often.”

Robin Rakusin put together a three-hole stretch with two net birdies and a net eagle to win the Net Division by three strokes.

She said the 12th hole on Sunday was the key.

“I was in the sand off the tee,” she said. “I had to go up the hill, over the grass and onto the green. When I hit it I thought it was going to go into the water unless it hit the flag. It did and went in for a birdie. Sometimes it’s better to be lucky than good.”

She said her play on the greens was solid.

“I had six one-putts and that zero-putt,” she said. “That’s what made the difference.”