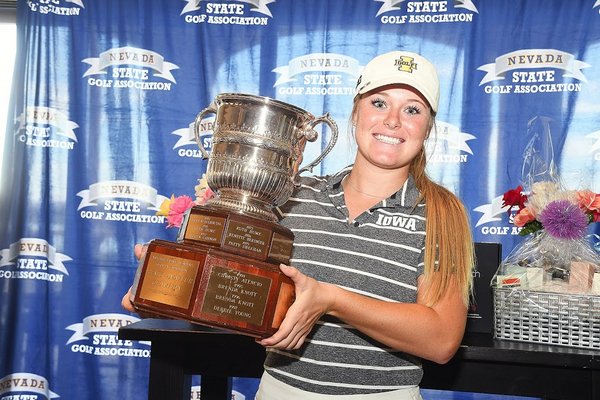 Morgan Goldstein put on a performances for the ages to win the Championship Division of the 2020 Nevada State Women’s Amateur played July 18-19, 2020, at Reflection Bay Golf Club. Sherry Jackson won the gross division in the Silver State portion of the event while Tiffini Phu was the Silver State net champion. –by Bill Bowman, Las Vegas Golf Insider staff. 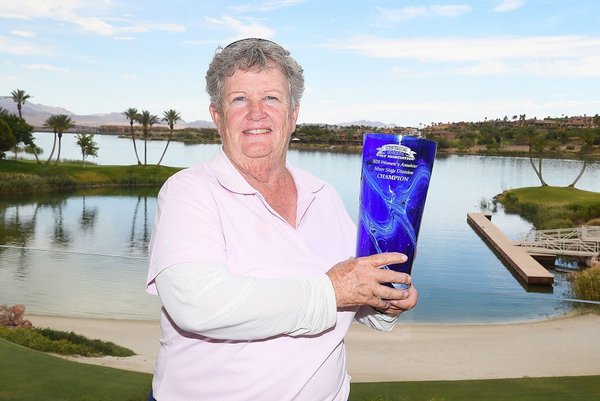 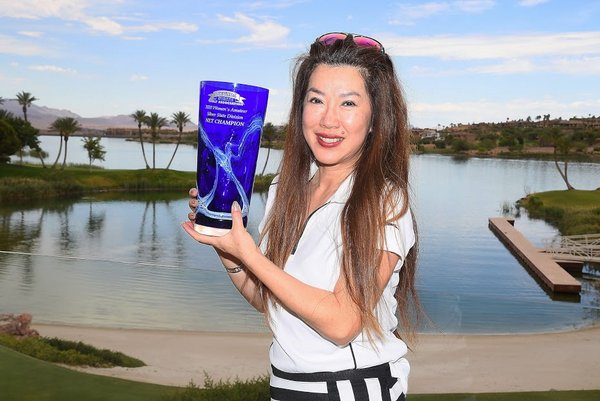 Morgan Goldstein, a sophomore-to-be on the University of Iowa golf team, came out red-hot both days of the tournament and coasted to an eight-stroke victory in the Championship Division.

She said her dad, Bruce, had a lot to do with her success.

“I was basically focusing on my process and routine and just having fun on the course,” she said. “I had my dad as my caddie and between shots we just had fun and laughs. It helped me stay calm and with moral support.”

She said her game hasn’t been consistent in recent times, but she worked on one aspect she felt was holding her back.

“Before this I didn’t have the best tournament,” she said. “I was sliding my hips so my miss would be a block. I worked on focusing on my hip turn and it really helped my swing and my confidence.”

And after the event, the pride was obvious.

“I got off the golf course and was super proud of myself,” she said. “I played solid and smart golf.”

Goldstein is used to success on the golf course. She had a perfect score in the Drive, Chip and Putt competition as she won in 2015, finishing first in all three shot-making challenges. The event finale, which saw young golfers nationwide attempt to qualify, was held at Augusta National and the 2015 edition was the second year of the event.

She wasn’t sure what to expect in the big spotlight. “When I first went out there on the tee my body went numb,” she said. “I couldn’t even think about anything. But all my practicing helped me hit it right down the middle and after that I was more comfortable.”

She also had a chip-in to win the chipping portion. Then came the putting. “I had the 30-footer and Dad told me to just snuggle it down there which I did,” she said. “On the 15-footer I got lucky and it hit the back of the cup and bounced up in the air and dropped back in the cup.”

Now, it’s back to Iowa. “We just don’t know right now,” she said about the competition plans. “It looks like we will only have seven days of competition with only Big 10 schools. We’ll just have to wait and see.”

But, she’s anxious to get back on campus.

“I’ve got an apartment there and I really miss it,” she said. “I love everything about it. The team dynamics are amazing and it’s just a great fit for me.”

Sherry Jackson played her final four holes in even-par and breezed on to win the Silver State gross title.

Jackson held a two-shot lead after the first day but had a second-day round that definitely qualified as up-and-down…with more downs than ups as she shot an eight-over-par 80. Despite the score, Jackson still won by seven shots.

“I did my best to give it away,” Jackson said with a laugh. “I just couldn’t find any takers.”

She said her first-day 76 was a solid effort.

“What helped me the most was that 76 yesterday,” she said. “I played well the first day and had a two-stroke lead. That’s what saved the day.”

The second day it all almost came apart early.

“I started with a triple (bogey) and brought everyone back into the tournament,” she said. “But with no live scoring the only ones who knew were the ones in my group.”

She said despite the struggles early, she eventually calmed down.

“After that I kind of pulled it together,” she said. “I shot an 80 which isn’t good but I shot 76 the first day and that’s pretty solid for me. It’s hard to follow up a good round with another good round.”

She said it’s been awhile since she’s been in the winner’s circle.

“Oh, my God…it’s been forever,” she said. “I tore a hamstring tendon in October of 2018 and it’s taken me this long to feel like a golfer again.”

She also credited Vic Wilk, from the Butch Harmon School of Golf, with helping her get back.

“I’ve only taken about four lessons from him but he’s been a huge help,” she said. “His help has given me hope.”

Tiffini Phu followed up a net 69 with a sizzling 66 to win by six shots in the Silver State net portion of the tournament.

“I’m still on Cloud 9,” Phu said. “This is absolutely the best thing that’s happened my whole life of playing golf.”

She said her playing partners helped her focus on her game.

“Playing with better players was great,” she said. “Keeping up with Theresa Summers was great. I knew if I could do that I would have a chance.”

The Chimera Women’s Golf Association, along with the course’s head pro Keith Josey, also played a vital role in winning.

“I started taking lessons for the first time,” she said. “And they paid off. Having a playing lesson (with Josey) really helped. I took a lot of notes. And the Chimera women were great. They were really supportive when I wasn’t that confident.”