Nevada Women’s Amateur: Joels Goes Back to Back 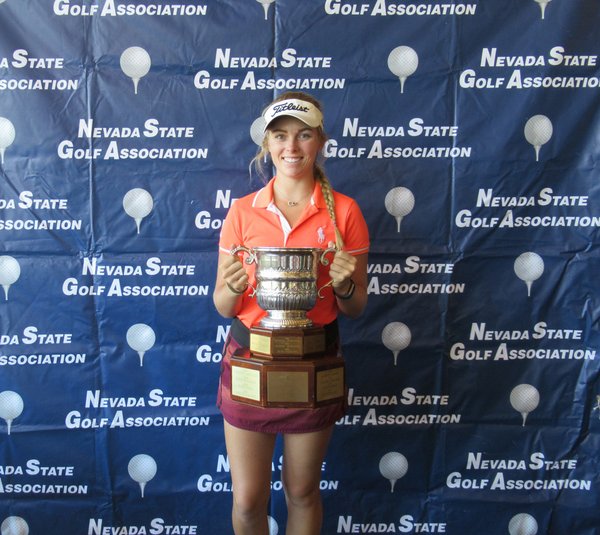 Joels was once again dominant, winning the 2019 event by nine strokes.

Joels, representing the Southern Nevada Golf Aassociation and TPC Summerlin, posted four birdies and five bogeys over the two days in finishing the tournament at 1 over.

“Everything was going really well,” said Joels, who played high school golf at Meadows in Las Vegas. “I was really consistent. It was just a lot of fun.”

She added her short game has been a big reason for her success.

“I’m chipping really well right now,” she said. “Every time I would miss the green, I’d chip it up, make the putt and move on.”

She also credited her recent performance in a U.S. Women’s Open qualifier in Phoenix as a positive influence.

“I missed out on qualifying by one shot,” she said. “It was really close. I played really well.”

“This was pretty much my last prep before I go back to school,” she said. “Now I know what I need to work on a little more. I want to dial my wedges in a little more and I want to step up and turn it up a notch.”

She said the staff at school is well aware of her recent prowess.

“They are posting about it on Instagram,” she said. “Coach (Amy Bush-Herzer) was really hyping it up, that’s for sure.”

“I kept feeling like I was playing really well,” she said. “Then I said to myself ‘stop thinking about it and keep playing one shot at a time.’ ”

Her tournament play didn’t start out well. She struggled with a first-round 87 but came back with a 76 the second day.

“It was one of those days,” she said of her second day round. “Everything bounced toward the hole for me. I found myself chipping a lot and chipped it to a foot a few times and made some easy pars. It was really fun. I wish I knew what the magic was.”

“I learned that a long time ago when I broke 80 for the first time,” she said with a laugh. “I told myself I could hardly wait to do this again tomorrow. But it took me over a year to break 80 again.”

Her key hole was the sixth in her second round.

“It was a long par-3,” she said. “The pin was in the back and over a ridge. I told myself I had to hit it to the ridge and let it trickle down. I hit it just like I imagined it and I had about a one-foot putt for birdie.”

Robin Rakusin has made huge strides in her short golf career as she won her first state women’s crown–the net title.

“I only started playing four years ago in my low 60s,” Rakusin said. “And because of the handicap system I can compete with these other players and there aren’t many sports you can do that.”

“I drove it terribly,” she said. “I didn’t hit a good drive until my 35th hole. But I played steady golf and played better than my handicap. I had a few unforced errors, I four-putted one hole, but not too many.”

She added her scrambling kept her in the hunt.

“I played from everywhere but the fairway,” she said. “But I recovered well. I’ve worked on improving my chipping and my short game and that really makes a difference.”